The 3.75-inch Vehicle Rey's Speeder Bike is one of those must-have toys for children who love Star Wars. The figure that comes with this vehicle is a special edition version of Rey who features in the movie Star Wars: Episode VII The Force Awakens.

​Rey is a human female scavenger who plies her trade on the junkyard planet of Jakku. She is recognizable by her loose fitting, off-white, wrap-style clothing, draped to provide protection from the sun and the sand. 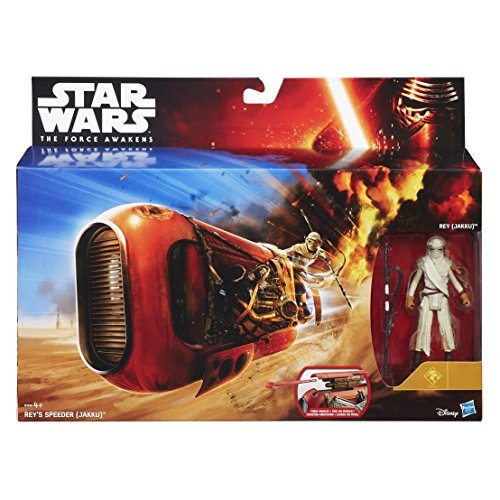 She has short black boots and brown gloves. She covers her head in a mummy-style head wrap complete with a pair of goggles. This piece isn't removable.

She carries a long staff with her. Her arms have the ability to move, but they are not bendable, and she does have movable legs.

Together with the figure is her trusty speeder. Just like in the movie it has the ability to fire missiles, and one is provided.

The salvaged speeder moves over the terrain easily. Its mission to recover the debris of ships and other discarded items. Removable netting on the side of the vehicle holds items that have been salvaged. The salvaged items, however, are not removable and are molded to the side of the speeder. They are well detailed though and look as if they are separate items.

Though the top of the vehicle is flat, this is where the missile is fired from. Press a button on the side and the cannon reveals itself. Press the button again and the missile fires. The missile loads easily for launching.

Show caution when you fire the missile, as it does launch rapidly and forcefully. The missile can be loaded separately into the gun cannon or you can actually leave it in the cannon without firing it. When you push the fire button, the top of the ship will rise quickly and let go of the missile immediately afterward.

The ship itself has an authentic design and the appearance of a salvaged craft. It has weathered areas on it with paint worn off, that make it look as if it has been cobbled together. The fins on the ship are movable and it has molded jet engines for speed.

The figure's feet and hands can be made to fit the handlebars and she fits snugly into the seat without falling off.

In the box you'll find the speeder, a special edition 3.75 inch figure of Rey, an accessory, projectile and instructions.