Lionel Mega Tracks Corkscrew Chaos comes from a 116 year old company that knows all about tracks. Lionel may be best known for their railroad tracks, but Mega Tracks has moved them into a completely new and exciting dimension.

Corkscrew Chaos is a zany, wacky mix of car racing and roller coasting all done by remote control. It's not really racing though, as only one car is supplied to run along the mega tracks. And it's not really a car as the remote control vehicle runs on a track.

In a Hurry? Check the price Online HERE﻿!​ 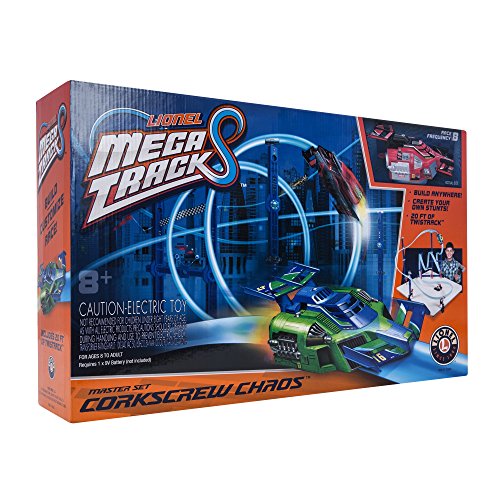 What is Lionel Mega Tracks?

Mega Tracks is a flexible track system on which you clip a car and send it around the track by remote control. The vehicle has a locking system that locks it on to the track. This enables it to run horizontally, vertically, diagonally and even inverted  - whatever way the kids design the track - without falling off.

Of course the vehicle will come off the track if speeds are too fast in some turns, and that is where the skill comes in. Getting round in their fastest time without falling off means learning where to ease off the power, and where to give it full grunt!

This is the exciting bit. You can customize your track design any way you want. The track can be bent and twisted into all manner of shapes and loops.

Track pieces are joined together with connectors that just slide on to the track sections and lock in place. 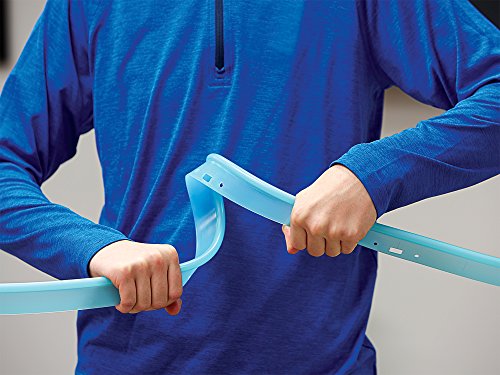 TwisTrack - Bend and loop the track as much as you want! 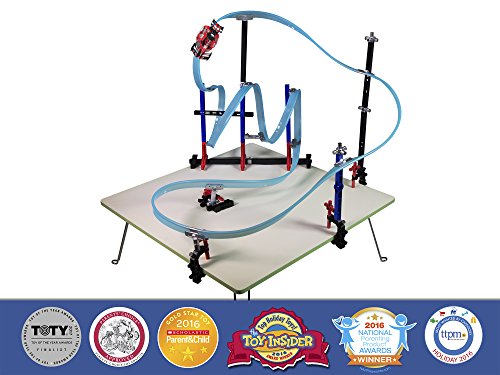 The whole track layout is held in position by a series of structure rods, clamps and connectors. The assembly instructions show how these go together.

You can assemble the TwisTrack almost anywhere - put it on the floor or furniture or even in a hand-held configuration.

If its going on to furniture though, make sure it's not going to scratch the surfaces.​

Lionel Mega Tracks is aimed at kids aged 8 to 11. Kids at the younger end of this range are probably going to need adult help in setting up a layout - at least initially. There are a lot of pieces and even with the assembly instructions included it could take a little while to get used to it all. Once they know how it all goes together, they'll enjoy experimenting with new gravity-defying layouts and stunts all by themselves.

To start with, it's advisable for your first layout to be one of those recommended for beginners, just so you get used to how all the pieces go together. The track suggested in the instructions takes about half-an-hour to assemble.

Kids can then design their own tracks and create amazing stunts. It's a real case of Over - Under - Sideways - Down when it comes to track design.

As Lionel themselves say: 'If You Can Imagine It - You Can Build It'.

The vehicle - let's call it a car - clips on to the track anywhere. You simply press on the base of the chassis to widen the lengthwise slot that enables the car to fit on the track; release it and the car clamps itself into place. Easy peasy!

It's powered by rechargeable batteries which will give about 25 minutes play on a full charge. A recharge then takes about 50 minutes - that's reasonable.​

The car is provided with either a red or a green body, and these denote the different operating frequencies the cars are controlled through. If you are using two cars on separate adjacent tracks, they must be of different frequencies or the signal from one or other remote controller will interfere with the other car.

The Mega Tracks RC Controller is a handheld, pistol-grip design, so should be easy for anyone to use to moderate the speed of their car.

There is provision for a  smartphone to be fixed to the top of the speed controller, so videos of your race car can be taken.

The controller needs a 9 volt battery which is not included, so don't forget to buy a battery for the Mega Tracks if you're giving this as a gift to someone.

Lionel Mega Tracks at a glance...

If there is any downside to Lionel Mega Tracks it is that only one child at a time can play it. Unless you have two separate tracks set up, that is. And whilst some customers have said that it is not a racing set up as only one car is used on the track, kids can still race against the clock and aim for the fastest lap times. See how fast they can do ten laps of the circuit, for example.

It's a skill-based toy and is as much a building toy as a racing toy with all the possibilities that exist with layout design. ​The only limitations to Lionel Mega Tracks are in the user's imagination.

To really get the most out of Lionel Mega Tracks you are going to find it useful to buy a track expansion pack or Stunt Pack as they call them, in addition to the Master Set. This will give your kids more track to play about with, and a lot more flexibility to build a really outstanding layout.​

This is a great toy. It will stimulate kids imagination and creative play and provide hours of fun - assuming they can get the controller away from dad, that is! 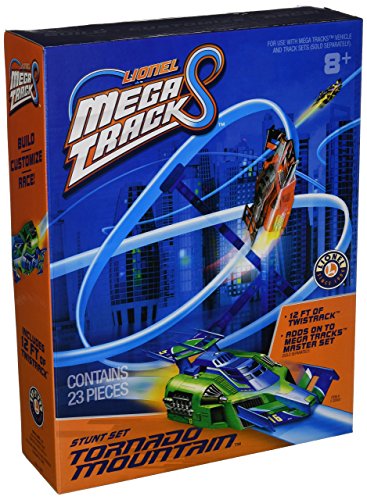 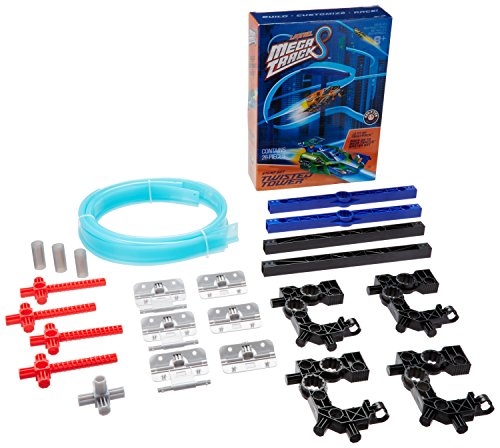 LEGO Ghost Hunting Sets On The Hidden Side