Childrens' understanding of technology is as essential today as ever before. In an increasingly digital world, kids need to hone skills as they grow that will prepare them for the jobs and careers of the future. Buildable robot toys can help them do this.

The best robotic toys to build, teach kids the STEM skills they will need - science, technology, engineering, and math - and in a fun way that is easy to understand.

Here, our selection of build-your-own-robot-kits ranges from the simple to the complex. Some use a free downloadable app from manufacturers to program and control the bots from smartphones or tablets. 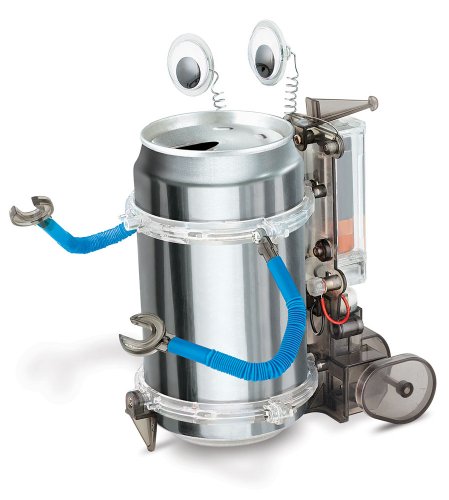 Introduce your kids to scientific and mechanical principles in a fun and exciting way with the 4M Tin Can Robot.

This tin robot is a fun robotics kit that will teach children the science behind creating a robot and the value of recycling.

They'll be able to build a motorized and functional silly robot toy, a motorized monster, or a variation of the two.

Kids only need a used soda can, one AA battery, and a Phillips screwdriver to build this robot. 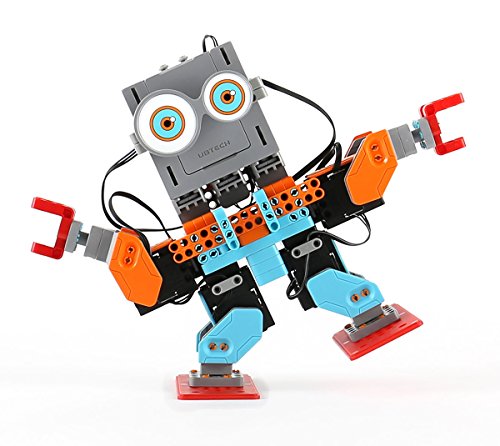 You build this robot kit in several ways. Either assemble the pre-designed Buzzbot or Muttbot - a humanoid type or a dog-based robot - or create a unique robot.

The parts are snap-together so kids can quickly assemble a robot of their choice.

Robot movements are pre-programmed into the Jimu app, which you can download to your smart device.

Good points are that it is easy to build and code. With 3-D animated instructions, the step-by-step assembly is straightforward. The larger the screen on your device, the better, so a tablet would be better than a phone.

The kit has several small parts, so it's best to keep younger kids away to avoid the risk of them getting swallowed!

This robotic kit is great for kids of eight years and above to engage in STEM learning. There are hours of fun to be enjoyed with this Jimu robot.

Ages: 8 years and up 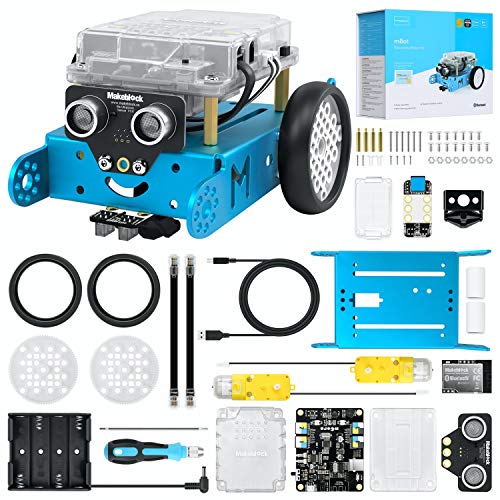 The mBot is a good starter robot kit for kids to learn about robot engineering and entry-level graphical programming.

It can be assembled easily in 20 minutes or so, without making any mess. Circuit boards and Bluetooth Modules clip into place, making robot construction a breeze. It is available in blue or pink.

Kids will find the remote control uses the mBot app, which they can download to iOS and Android devices. Also downloadable is mBlock software based on the Scratch 2.0 programming language and which works with PCs.

There are separate versions of the kit. The Bluetooth version will be best for family and home use. (Note - mBot is not compatible with Amazon Kindle Fire tablets).

There are many modes to play with mBot - it has sensors that allow it to follow lines and avoid obstacles. You can reassemble and reprogramme many times over.

What's also cool about the mBot kit is that it is compatible with LEGO pieces, so you can use your imagination to modify your bot's appearance if you wish.

The mBot is an affordable STEM robot kit and a great educational tool, providing simple learning about coding and robotics.

There are Add-ons to extend the scope of mBot - Click HERE! 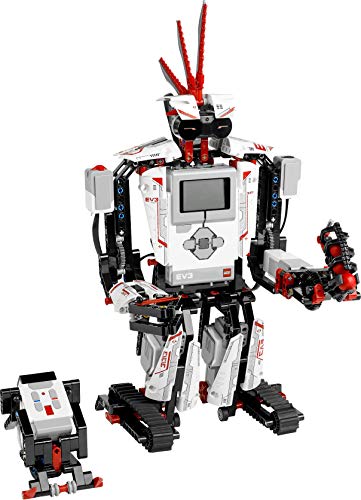 The LEGO Mindstorms EV3 robot kit is in a class of its own. Over 600 pieces in the box enable your kids to build 5 different robots.

Technically it's better than previous models, with a faster processor, more memory, touch sensor, color sensor, infra-red sensor, and so on.

It's been put together to make it more fun and easier to get started with and to be able to create some very cool-looking robotic machines.

At the core of this robot is the EV3 brick with an ARM9 processor. It has a USB port for WiFi and to connect to the internet, a Micro SD Card, four motor ports, and backlit buttons.

Control is by integration with your smart device - you download the free EV3 software - as well as with a remote control unit.

Each robot has about five different missions to follow, so there is plenty to do with EV3.

The Lego Mindstorms EV3 makes it possible for anyone to build and control robots. It is pricey but offers superb value for this type of toy. 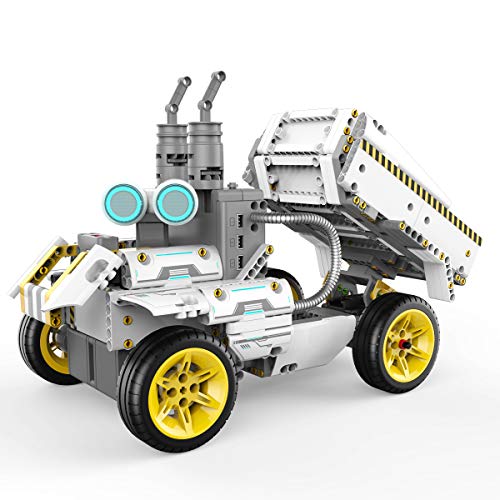 Using Ubtech's award-winning building block system kids can build, code, and interact with their Builderbots robots - Dozerbot or DirtBot - in this Overdrive Kit. They can even create their design of robots from the parts supplied.

You'll need a compatible Apple or Android device to operate Builderbots.
Download the free JIMU Robot app, then get to work using Blockly coding to navigate your Builderbot around obstacles, pick up objects, follow a routeway, learn STEM skills, and have a lot of fun.

These bots have two robotic servo motors, 2 DC motors, an ultrasonic sensor, a rag light, the main control box, a rechargeable Lithium-ion battery, and a USB cable for charging.

There are 410 snap-together parts. The assembly guide uses 3D and 360 degree animated instructions which makes the robot building a breeze.

Buildable and codable robots like Dozerbot or DirtBot are great ways for kids to learn about robotic engineering and programming and have a great deal of fun at the same time!

Recommended ages: 8 years and up. 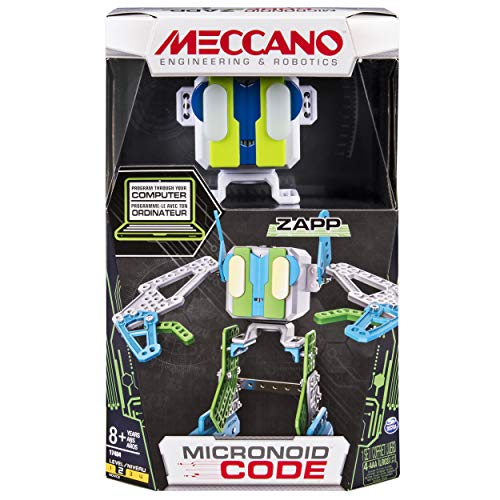 Kids can build Micronoid Code Zapp, connect it to their computer, then program it. This nice-sized STEM robot from Meccano takes a bit less than an hour to assemble, and then your kids are ready to start learning the basics of coding.

Kids can code their robot movement sequences, use the built-in games, and create music with the Micronoid's sound effects.

There are several Micronoid robot versions (see all Micronoids HERE!), each with a distinct personality, style, and voice. They interact with each other and, when working nearby, will coordinate their moves.

Ages: 8 years and older - for budding engineers and robot-coders at the novice level. 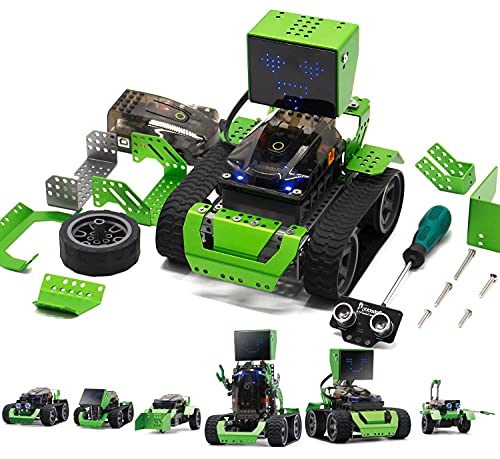 This DIY Robot kit is an excellent introduction to science, engineering, and coding. Just build a robot, then control it with your phone or tablet.

Qoopers is a programmable, build yourself robot that you can assemble in any of 6 pre-designed ways - as either the Captain, Scorpion, the Voyager, the Dozer, the Cavalier, or the Guardian. You can also use the components to construct your very own custom design robotic machine.

Components are made of metal, which is a pleasant change from the more usual plastic, and the aluminum parts have a nice colored metallic finish.

Use the Robobloq app for fully illustrated building instructions - robots take less than an hour to assemble. Then use the app to set up and run your robot.

The Scratch 2.0 based graphical programming system is easy to use and helps you learn coding fast with its user-friendly interface. You program your robot by dragging and dropping code blocks into a command sequence on your smart device.

When assembled, Qoopers run on powerful motors and provide a lot of fun indoors or outside. The control range is about thirty feet using Bluetooth.

You'll need 6 x AA batteries, so make sure you have enough replacement batteries as these robots will get a lot of use.

From a gift perspective, Robobloq Qoopers comes in neat packaging. The main pack contains 5 boxes clearly identifying the different parts - electronic modules, hardware and tools, main board and so on.

This exciting robotics package for older kids is fully customizable on the hardware and software sides for more advanced users.

Qoopers is a fun learning experience, whether building the machine, programming it, or playing with it.

Ages 8 years and up. 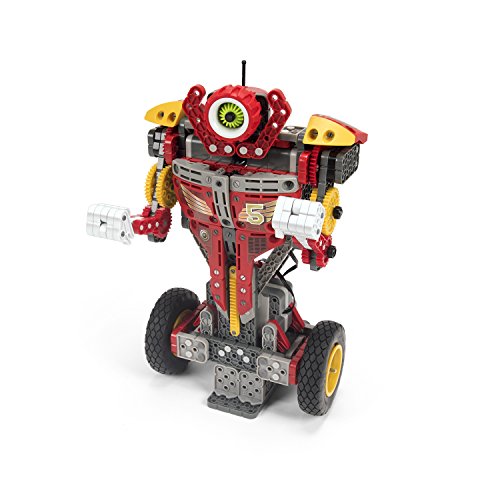 This boxing robot from Hexbug has over 600 snap-together parts. Kids control Vex via the free Vex Pilot app for Apple and Android devices that you can download for free.

The bot uses self-stabilizing technology to operate upright. When you have two Vex and have downloaded the app, they're ready to throw a punch or two at each other.

The boxing bots are available singly.

6 x AA batteries are needed per robot, so make sure you have enough spares.

For ages 8 years and up. 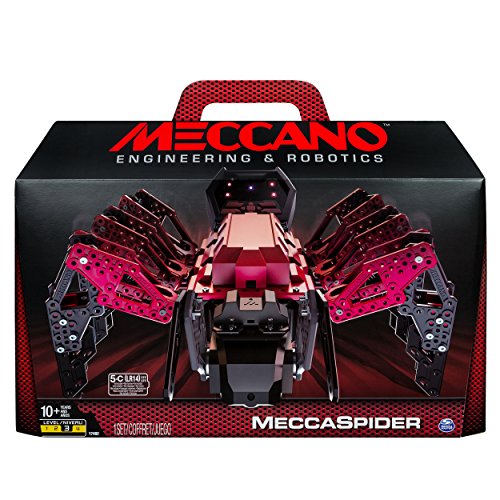 There's a lot of fun to be had building the Meccano MeccaSpider, but the real fun comes when it's time to play.

It'll take between one and three hours to build, depending on your child's ability. Then you'll have an 18 x 16 x 7.5 inch hi-tech robotic spider that's full of surprises!

With built-in games, a guard mode, and an attack mode, this interactive spider robot will show its personality and provide a lot of fun for all the family. 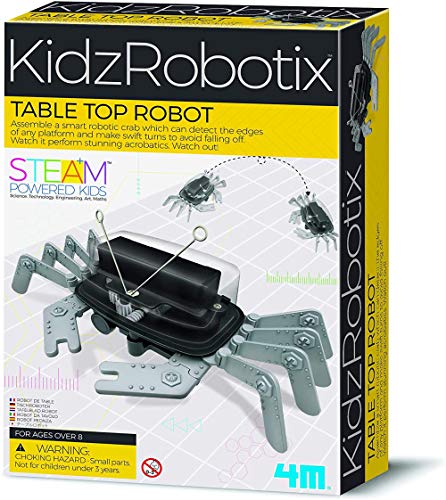 You can teach kids the basics of robotics by building a working robot of a crab! That's what the 4M Tabletop Robot does.

This toy is an excellent and straightforward introduction to robotics that could stimulate a child's interest to learn more about science.

When assembled, the crab will move under its power, stop at obstructions and change directions, and perform some tricks. You don't need any special tools, just a Phillips screwdriver, but a single AA battery is required to power the bot.

Recommended for children 8 years and upwards.