Code-a-pillar from Fisher Price is an imaginative learning toy in their Think and Play range, that has been designed to help little learners become big thinkers.

Code-a-pillar is a cute character that uses light, sound and actions ​to help develop skills in problem solving and coding. 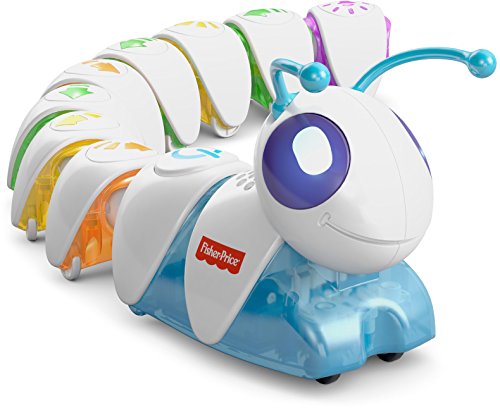 How does Code-a-pillar work?

Code-a-pillar is made up of nine separate mini-wheeled pieces that click together. A motorized head segment plus eight body segments. Each body segment represents a different movement or reaction.

If you look at the main image above, on the third segment behind the head you'll see a green arrow pointing forwards. This signifies forward movement.

The segment behind it has an orange arrow pointing to the left. This would make it move to the left.

And the last segment shown - the pink-mauve one -  is a music segment. You can guess what that does.

At the rear of all the segment pieces is a USB socket, and at the front of all body segments is a USB plug. It is this plug and socket arrangement that enables the different segments of Code-a-pillar to be joined together, easily and in whatever sequence you want.

Press the on/off switch behind the head section and it powers up. As each individual segment powers up and code-a-pillar reads the code in each segment, colored lights will illuminate the top of each one of them to indicate they are ready.

When all segments have lit up, code-a-pillar will move off. 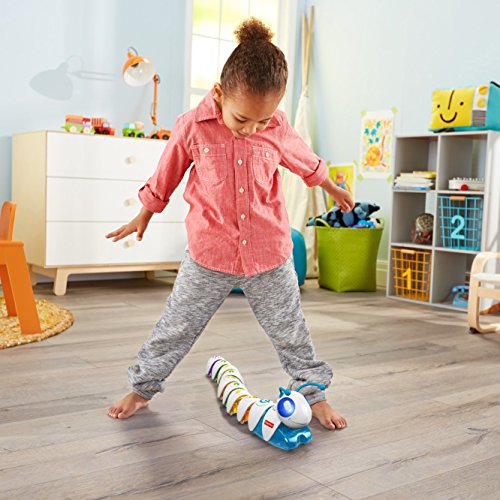 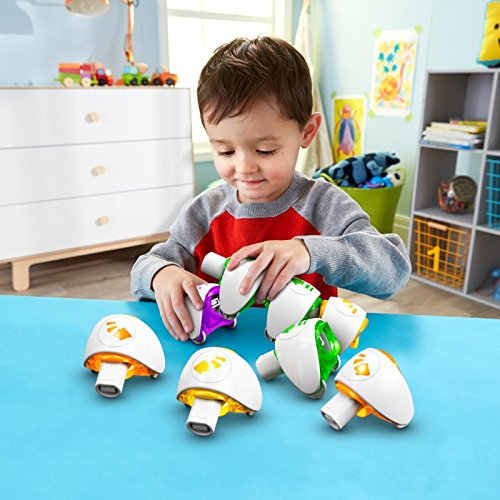 What does Code-a-pillar do?

Kids connect the different segments of code-a-pillar to perform a series of actions, or code, in the same sequence as the segments are located behind the motorized head.

It's not code in the sense of creating a software app, more about creating a 'sequence' that the code-a-pillar will follow.​

Kids can recognize each action actually taking place as the top of each segment flashes color when it is happening.

The eyes of the motorized head also flash with the same color to signify the action taking place. So kids are learning through a process of exploration and discovery.

Every time kids change the sequence of the segments, Code-a-pillar will take a different route. They'll notice the change and learn accordingly.

How can kids build on this?​

Once a child is familiar with how to code the toy, and they become more adventurous, they can learn how to move it from a starting position to another specific position.

Two small colored disks are provided - one red, one green. The green one can be used as a start point for the code-a-pillar, and the red one as a target destination the child could aim for.

As an extra challenge, they could set a few obstacles for the toy to have to go round before reaching the red disk.

That involves problem-solving, and when it can't be done the first time, the child just starts all over again until the toy is coded with the segments clipped together in the correct sequence.​

The eight body segments included in the pack plus the motorized head are:

Body segments separate and go back together easily.

Code-a-pillar at a glance...

This is a cute toy caterpillar and a great fun and educational toy. The mix and match capability of the operating segments allows for a lot of active and creative play. This in turn helps preschoolers with problem solving and critical thinking.

It works best on a flat hard surface. On thick carpet it doesn't work - it won't move.​ And you will need a fair bit of space to use it to its full potential.

The sounds the toy makes can seem quite loud after a while, as there is no volume control. The only way round this would be to muffle the loudspeaker in the head unit by partially taping over the speaker vents.

Code-a-pillar helps pre-school children to think independently and to solve problems. It is good for cause and effect learning as they see the results of their own actions straightaway.

The coding caterpillar was shortlisted for 'Toy of the Year' and has become a Best Seller on Amazon with a lot of positive reviews. 4.3 stars out of 5 stars means a lot of other people think Code-a-pillar is as good as I do.

Expansion Packs ​add extra functionality to the Code-a-pillar so that you can do more with it. The Master Moves pack is probably the best choice. 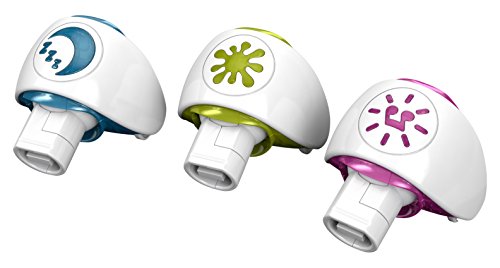