There are many an adventure to be had with the Shark Bite Pirate Ship. From the deck upwards, it looks just like an ordinary pirate ship. But look at it from the front, and those giant shark-like jaws at the bow show it to be something different.

Is it a pirate ship, or is it a shark, though? Let us take a look. 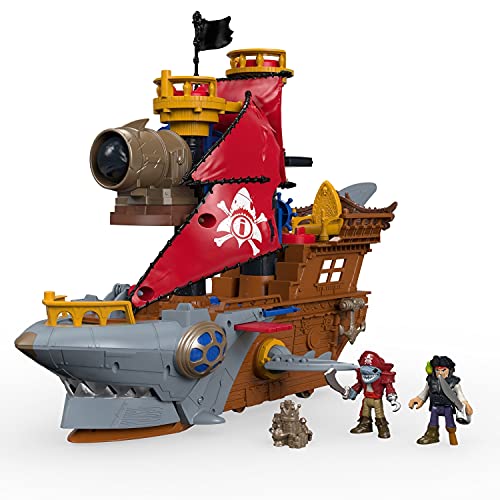 Once out of the box, the Shark Bite Pirate Ship is ready to be played with, just needing the various accessories to be deployed around the ship. It's big and looks a lot of fun.

The pirate figures have a nice amount of detail on them. One has a 'pegleg', is dressed in a black jacket with purple trousers, and has a parrot on its shoulder and

The other is a shark-headed pirate with a red jacket, huge epaulets, and a hook for a left hand. They both have removable pirate hats and a cutlass-like sword that can clip onto their hands. 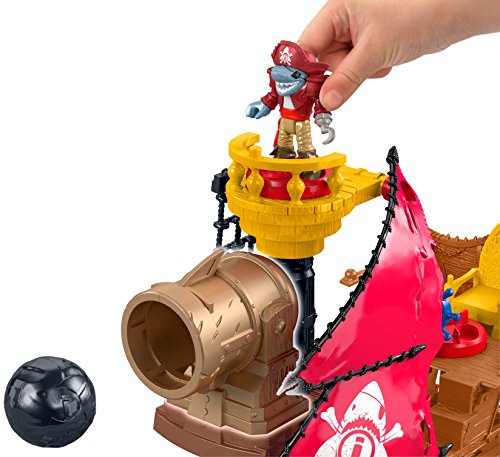 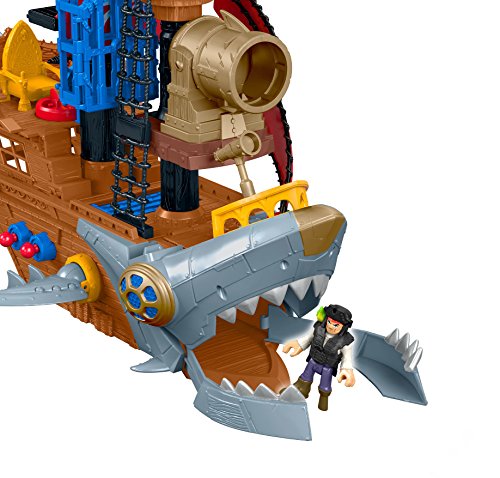 You can place the pirate figures on any three power pads that activate the ship's features. The power pads can be turned left or right by hand or by holding a pirate figure in place to do so.

Up in the front crow's nest, you can turn the power pad there to aim the cannon and then push down to fire it.

The middle crow's nest power pad activates the shark bite action causing the shark nose to lift and the lower jaws to open wide. Then the ship can bear down on an unsuspecting foe and sweep them into its hull. Another prisoner taken!

The power pad on the poop deck at the rear opens the treasure hold on the port side when it's twisted to the left and fires projectiles from the starboard side when turned to the right.

Q: Why are pirates called pirates? A: Because they aaaaaarrrrrrrrrr!

The shark fins on the sides move to look like a shark moving through the water when you push the pirate ship along.

On the poop deck at the rear of the pirate ship, there's a bright yellow seat for the pirate captain to sit on, just behind the helm (that turns) used to steer the vessel.

In a HURRY? You can buy this playset at best price HERE!

Near the front of the deck is a liftable hatch that reveals prisoners captured in the hull.

And there's a spyglass right in the bows to search ahead for your next 'catch.'

On the port side, there's a retractable plank for 'walking the plank.' It's not too long and looks strong enough not to break easily.

And the treasure hold opens to reveal your stash of gold and trinkets!

The starboard side holds the twin firing position for the projectiles fired by the rear power pad. You have four projectiles in total.

Rigging takes you up to the vast cannon mounted on the front mast, from which you can fire a cannonball at your enemies.

Red sails with a shark version of the skull and crossbones, finishes off the appearance of this super cool pirate ship playset.

With the power pads putting control of the ship's actions into the kids hands, there's plenty of swashbuckling fun to be had with the Shark Bite Pirate Ship Playset. It has interesting features not seen in other toys. 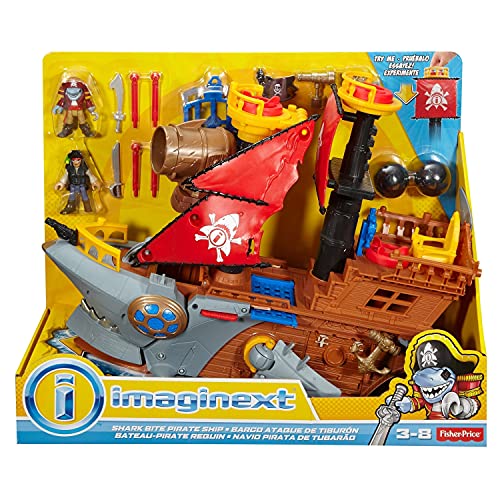 If there's one improvement I would make, it would only be to have two or three more figures included, but that's a trivial matter really.

This is an impressive playset and of obvious good quality, as you would expect from Fisher Price. It is rated highly by purchasers and I can see why.

If any of your kids or grandkids are into pirates, it'll be a case of 'Shiver me timbers' and 'Heave-ho me hearties', because they'll really want one of these.